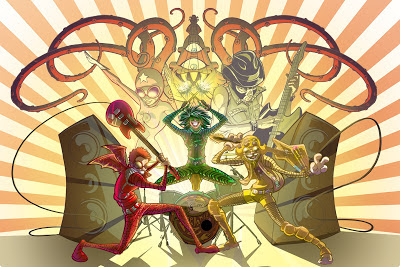 “Get Glasses” is the latest single and video from the new Peelander-Z album “Space Vacation”!

“Standing on the sidelines is not an option when Peelander–Z hits the stage.” – Time Out New York

Brooklyn by way of Japan-based band Peelander-Z launches its fall “Metal Man” tour in Cambridge, Mass today.  The six-week run is the final bow for band member Peelander-Red who announced his departure via YouTube.  As he explains it, Peelander-Red will be leaving the band to become a full-time teacher at “Ninja High School.”

In tribute to Peelander-Red, fans of the band have been “disliking” his video message in order to turn its YouTube status bar completely red. See below for complete tour dates, which include a stop at Daytrotter on Thursday, Oct. 18th for Peelander-Z’s first taping there.  The recording session will air live at 4PM EST.  Fans can sign up for a free trial subscription to Daytrotter at daytrotter.com to listen in.

In other Peelander-Z news, venerable music discovery website Brooklyn Vegan has exclusively debuted the band’s new video (shot live at Red 7 in Austin, TX) for the single “Get Glasses” from Peelander-Z’s latest album Space Vacation, out now on Chicken Ranch Records.  Brooklyn Vegan will also present the final date of the band’s “Metal Man” tour on November 23rd at the Knitting Factory in Brooklyn.

Lastly, after performing at the inaugural Great Googa Mooga rock-meets-food-festival in Prospect Park, Brooklyn this summer (where NBC’s “1st Look” caught up with them), it makes sense that Peelander-Z leader Peelander-Yellow would be commissioned by “Top Chef” Season 9 winner Paul Qui to give his Austin-based “East Side King” food truck a makeover. Follow this link to see it happen and read more about it via the Huffington Post.

Peelander-Yellow of Peelander-Z is available for interviews.  Contact Josh Bloom at Fanatic for more information. 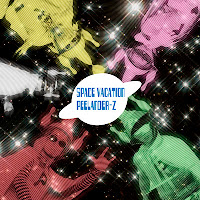