“Hurting Heart,” the first single from new album, Burying The Dead is an undeniable slice of dark Americana. 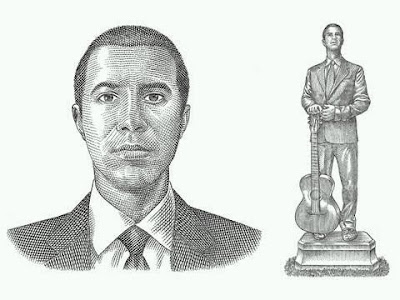 “Hurting Heart” is the new single and video by RICHARD MCGRAW

“McGraw expertly navigates the waters of our communal subconscious, showing us the beauty in even our bleakest moments.” – Performing Songwriter

Self-described anti-anti-folk artist Richard McGraw will perform at NYC’s famed American Folk Art Museum (45 W 53rd St, between 5th and 6th Avenues – just down the street from the Museum of Modern Art) next Friday, March 5th. The performance is part of a night to celebrate the work of Nineteenth century maritime painter Thomas Chambers. Read more info about this event HERE.

While McGraw might describe his music in terms that deem him an outsider, his single “Hungry Heart” (MP3) from his latest album Burying The Dead is actually quite accessible amid its dark and gruff overtones. A great melody and an urgent vocal can’t be denied no matter how “anti” McGraw may claim to be.

Following in the footsteps of the poet-songwriters like Leonard Cohen, Bob Dylan, Nick Cave, Tom Waits, and Lou Reed -- McGraw contemplates the trials and tragedies of the human condition with beautiful and poignant honesty. His uncommon vocals tremor and plead heavenward, relaying woeful tales of love and loss, existential terror and a longing for transcendence. 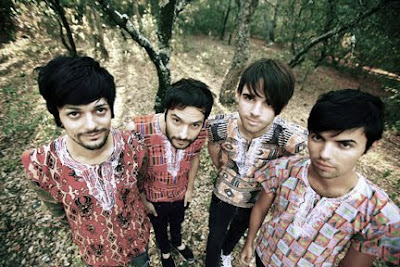 All tracks named after girls including cover of MJ’s “Diana” and single/video, “Maria”.

Blasfemea is a Lisbon, Portugal-based tropical psychedelic electropop band, formed in the early 2000's by Tiago Amaro, Fabio Jevelim (vocals and guitars) and the Lourenço brothers (David and Rui on drums and bass.) Blasfemea's debut album Galaxia Tropicalia is a record comprised of 10 pop songs, all named after girls (including a cover of MJ's "Dirty Diana,") and all destined to be singles.

Released in other parts of the world in October 2009 and now set for release in America in April 2010, Galaxia Tropicalia can stand against the modern music of Midnight Juggernauts, MGMT, Vampire Weekend or Buraka Som Sistema and shows off the band's base influences of afro music, psychedelia and the "true to you" sound of Beatles pop. Galaxia Tropicalia also features horns by members of Portugal's Bambule, violin by Ana Meneses and the special participation of British band, Dead Kids.

Originally, all the tunes on Galaxia Tropicalia would be named after girls and each girl would have a different city. The band choose this concept at the beginning in order to limit their minds to a specific concept and achieve a focused, solid album. Ultimately, the band narrowed the focus to just girls. Who could blame them?

You can check the emerging result yourself on Blasfemea’s Galaxia Tropicalia.

Video for "Who Threw That Ham At Me?" by Schneider's new project, The Superions, debuts on YouTube. 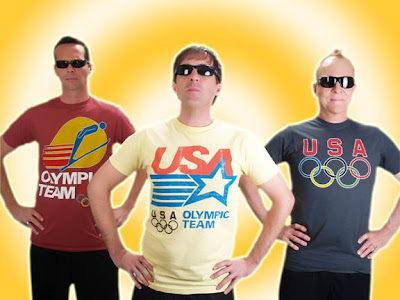 "Who Threw That Ham At Me" is the new single and video by THE SUPERIONS.

Fred Schneider of The B-52's doesn't sit around the way some rock n' roll legends might. To the contrary, Fred is very busy doing what rock stars are supposed to be doing: making music and inspiring the next generation! Fred's current project, The Superions, is in full swing with the recent release of the trio's debut self-titled EP, its' off-the-wall single, "Who Threw That Ham At Me" and remixes by Casper & The Cookies, Marshmallow Coast, The Lolligags and Ursula 1000.

Inspired by urban myth (the Paula Deen incident is only a happy coincidence!), the song will be spun by Howard Stern on his radio show this coming Monday, February 22nd when the two legends meet for an interview on Stern's Sirius/XM radio show. Tune in at 8:30 AM to Howard100 to learn how to do the "Disco Garbage Can" and maybe even the "Rock Lobster."

This week, Fred is also the guest editor at Magnet Magazine's website. The very best indie music magazine on the planet, Magnet runs a weekly feature where a notable musician or culture figure will take over the publication's website for a week, revealing lots of info about their personal interests, habits and obsessions.

Read all about it right now at: www.magnetmagazine.com

Fred Schneider is available for interviews to discuss The Superions and his life with The B-52's. Contact Josh Bloom at Fanatic Promotion for more info here.

[Stream]: "Who Threw That Ham at Me"
http://fairtilizer.com/track/thesuperions-whothrewthathamatme

The Shondes "Make It Beautiful" for Valentines Day. Check out the first single from "My Dear One".

The Shondes to perform Feb. 27th in NYC; multiple SXSW appearances scheduled with full US tour to follow. See the album trailer HERE. 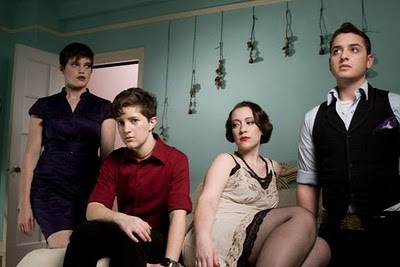 “MAKE IT BEAUTIFUL” is the first single from THE SHONDES second album, MY DEAR ONE.

“When these four take the ideology to the amps, things fall in line...” – SPIN

Brooklyn-based band The Shondes have a Valentines Day gift for you – “Make It Beautiful” – the first single from the band’s upcoming second album, My Dear One, scheduled for release May 4th, 2010 on Fanatic Records. The tune is an optimistic moment on this classic album for survivors of broken hearts. To learn a little more about The Shondes and My Dear One, check out the trailer for the album HERE.

See The Shondes live at the Hamanbashin Purim Party at The Suffolk in NYC (107 Suffolk at Rivington) on Feb. 27th at 9PM w/ DJ Ultragrrrl and more! RSVP HERE.

In addition to the Purim Party performance this month, The Shondes also have several appearances planned for Austin’s South By Southwest festival in March. The band will perform at the Fanatic Records showcase at Beauty Bar on March 16th, Club Primo’s on March 18th and the annual Gay Bi Gay Gay event on the 21st. More details are to be announced regarding the “Heartbreak Tour” by The Shondes to be kicked off in April.

In addition to making political art and melding influences as disparate as classical and traditional Jewish music and punk rock, The Shondes work for justice on many public levels, including in queer communities and as Jews fighting for a free Palestine. But, the band’s upcoming second album My Dear One is a more personal reminder that those who fight for what they feel passionately about still suffer heartbreak and require the intimacy of community and art to recover.

Both as individuals and as The Shondes, Louisa Solomon (bass, lead vocals), Elijah Oberman (violin), Temim Fruchter (drums) and guitarist Fureigh (guitar) have always chosen to explore this duality, to attempt the impossible, or at least, the inadvisable. “Shonde” is the Yiddish word for disgrace, after all. Heartbreak sucks and while My Dear One explores this in depth, the songs also explore questions about how each of us deserves to be treated and how we should treat each other.

Posted by Fanatic Promotion at 3:17 PM No comments:

Rappers Scripts N' Screwz start off New Year with "On 10," the first single from St. Louis duo's next LP. 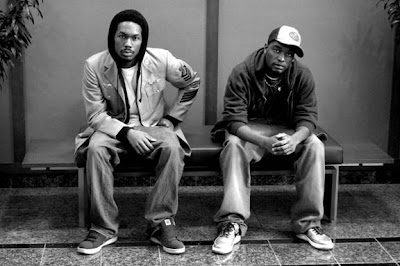 “ON 10” is the first single from the upcoming SCRIPTS ‘N SCREWZ album THE HANGOVER.

“Here’s the newest single from this ill duo. Their The New Noise got a lot of praise, and they’ve got their new project, The Hangover, on deck. ‘ON 10’ might be my most favorite slang since ‘goin’ ham.’ This one has a pretty ill feel to it - one part otherworldly bass, two parts banging on steel pipes and thangs. Shit’s knockin’” - Rock The Dub

Scripts ‘n Screwz is back with their all-new single, “ON 10.” The meaning of “ON 10” originally came from the duo joking around and describing ‘extreme behavior’. The kind of behavior that is “ON 10.”

The track is already lighting up the darkness of the internet and is the lead-in to the duo’s upcoming sophomore album The Hangover which follows the acclaimed debut, The New Noise. You can grab the track below and if you are so inclined, a trailer for the tune has also been assembled for your viewing and re-posting pleasure. See it here: http://www.vimeo.com/8626725.

Scripts ‘n Screwz fans hungry for more new music before The Hangover is released can tide themselves over with a free Valentine’s Day mix tape by Scripts ‘n Screwz member, Loose Screwz. Entitled I Heart Beats, the full-length MP3 can be downloaded right now, right HERE.

Loose Screwz says, “It is a collection of some of my hottest productions that I offer as a gift to all the lovers of music on this Valentine’s Day.”

Posted by Fanatic Promotion at 6:32 PM No comments:

The Ph.D holding members of Glimr make a new record in a particle accelerator.

And, yes, that's Glimr member Ankle The Mimic's prosthetic leg. And, yes, the band drank bourbon out of it while making this album. 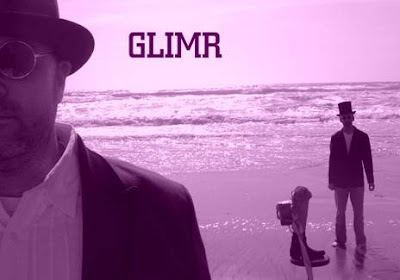 "Sunburned at Midnight" is the first single from Faith of Our Fathers by Glimr.

The three core members of Glimr -- Michael Temkin (guitar, voice), Chirs (guitar, keyboard), and Ankle The Mimic (bass) -- recorded the album Faith of Our Fathers at two different collision regions of a 1.5 mile long particle accelerator that studies differences between matter and anti-matter.

What defies a conventional explanation is the fact that the Faith of Our Fathers live track,
"I Know His Blood Will Make Me Whole," was recorded after Temkin partook of some bourbon from Glimr bassist, Ankle The Mimic's prosthetic leg.

More Bermuda Triangle than holy trinity, Glimr lives somewhere in the musical space in between Molly Hatchet, Art Bell, and The Audubon Society. The Vanity Project fanzine says Glimr's music, "wraps itself around a descending pole of post-rock psych sludge that enlivens itself with hints to Magic Band atonal desert blues."

Posted by Fanatic Promotion at 2:06 AM No comments:

“Don’t Dance” director Jack Packard works as a writer/producer/content supervisor for the Will Ferrell / Adam McKay website “Funny or Die.” He gained notoriety with his series of “High-Five!” videos posted to the site. The New Loud is a new wave/electro/punk band from the working-class midwest US city Milwaukee, WI.

“Don’t Dance” is from the band's upcoming EP, Can’t Stop Not Knowing which was produced and recorded by band member Shane Olivo and mixed by Mark Trombino (Jimmy Eat World, Rilo Kiley, Drive Like Jehu). The band continues their collaboration with Trombino on a follow up LP to be released in the Spring of 2010.

“DON’T DANCE” is the first single and video from CAN’T STOP NOT KNOWING by THE NEW LOUD.