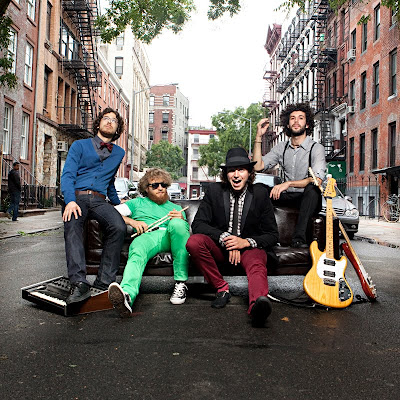 NYC masters of rock, Julius C will be performing 30 times in 30 days starting September 1st at .

It’s no stunt, it’s just another 30 days in the life of this band that has lots of fun but also gives back. By way of that generosity, the band has added Powerhouse, the new and innovative supportive housing program for homeless pregnant/parenting teenage mothers located in , to the list of partners supporting the month-long event. In addition to spreading the word about Powerhouse through September, the band will donate a day of its Rock Star Camp program to the organization.

Julius C leader Jay Stolar developed Rock Star Camp to bring more arts activities to summer camps in the Northeast and Julius C tours youth camps each summer, spending the day teaching songs to the kids and staging a concert each night where the campers performed backed by Julius C. The band played to nearly 20,000 campers and staff this year. Julius C plans to do the same for Powerhouse, bringing some much-needed stress relief to the young mothers in the program at a time full of challenging circumstances.

Silly Bandz are the sensation that is sweeping the nation. You’ve seen them everywhere… they look like rubber bands until you remove them and they snap back into fun animal shapes! Julius C loves them too and has partnered up with Silly Bandz to co-sponsor Julius C Tours NYC: 30 Days, 30 Shows. Anyone attending one of the performances during the month of September will receive free Silly Bandz. You can use ‘em to put your face back together after it gets rocked off, OK? Or trade them at the bar. Or just put your hair back. There are plenty of uses for Silly Bandz.

See below for a complete run down of where to find Julius C during the month of September and click the flyer to download a printable PDF.

Contact Josh Bloom at Fanatic Promotion for details about private events, secret shows and for interview opportunities with Julius C! 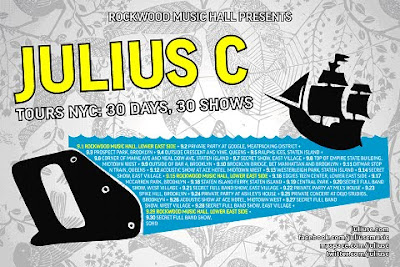 A group of gorillas has run amok in and it’s no surprise considering they’re listening to the perfect soundtrack for the summer: Julius C’s debut single “Don’t Want Anybody.” Directed by New York-based filmmaker, Jay Lap, a friend of the band since his days at the prestigious Tisch school, the “Don’t Want Anybody” clip is about as fun and funny as you might expect from a band that is able to take a tune about love, loss, and self-discovery and render it as explosively raw pop.

Posted by Fanatic Promotion at 1:26 PM No comments:

TV Buddhas from Tel Aviv via Berlin about to conquer USA on upcoming six-week tour.

“TV Buddhas are a band that I liked the instant I heard them… This band is one lucky break away from breaking away.” - Ben Donnelly, Dusted Magazine

Originally based in Tel Aviv, but now located in Berlin, the three-piece rock band know as TV Buddhas will Americanize themselves over the course of a non-stop six-week tour of the US this Fall. The band will be supporting a new EP on the We Are Busy Bodies label. The band recently made the “Let Me Sleep” (MP3) single available and now present the “Fun Girls” (MP3 | VIDEO) for your pleasure.

TV Buddhas consists of brother and sister Uri and Mickey Triest, and Mickey’s husband Juval Haring. The band makes punk rock in the vein of Richard Hell, Modern Lovers and The Ramones. They bring back outsider rock and roll, straightforward lyrics and raw simple playing with heart. They started as a duo, leaving around late 2007 to tour in after just a month of rehearsing and three songs in their setlist.

The band grew and expanded, wrote songs and recorded on the road, on days off in between more than 400 shows to this day. As a trio, the TV Buddhas S/T EP is their first release. Recorded in their current home base of in about an hour and using just one mic and a field tape machine, the EP showcases the basic elements of TV Buddhas: minimalist drums, loose guitars and an anti social edge. Like a post modern take on Jonathan Richman mixed with The MC5.

See below for a complete list if US dates. Members of TV Buddhas are available for interviews and would love to speak with you!

Posted by Fanatic Promotion at 12:26 PM No comments:

“…Hardest is Actually The Easiest” single and riff on Mirror’s “And The Radio Played On” available now. 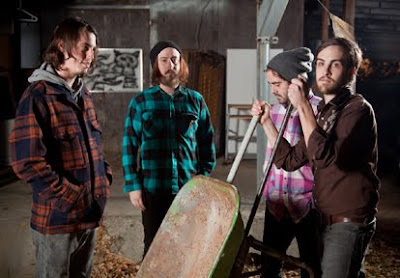 The Shimmies
To All Beloved Enemies
(Self-Released, )

“4.9/5. I have not heard such a powerful rock album since The Lips came out with The Soft Bulletin. Both are equally as impressive. That is where this band stands." – Zaptown Mag

"Filled with emotional, heart wrenching lyrics to match their soaring guitar lines this group has tested the waters of time and put together one of those albums you can’t stop listening to, front to back." – The Owl Mag

“Their new release, titled To All Beloved Enemies, is like a wonderful combination of Grizzly Bear meets Fleet Foxes meets a Jeff Buckley-fronted Band Of Horses.” – Ruined by MTV

Posted by Fanatic Promotion at 12:20 PM No comments: 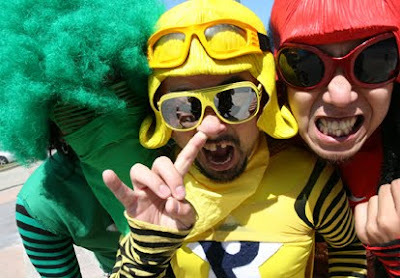 Peelander-Z in the Press

“ Peelander-Z is an out of this world punk band with an unbelievably interactive show to boot.” – Seth Fraser, Beyond Race

“Standing on the sidelines is not an option when Peelander-Z hits the stage.” – Daniel Derouchie, Time Out

Peelander-Z, the Japanese Action Comic Punk Band based in New York City, has signed with Austin-based Chicken Ranch Records (The Clutters, We Were The States, Knife In The Water) for the release of its new album P-TV-Z, a record the band calls the “ultimate happy fun kid friendly punk rock record.” Previous records by the band have been self-released. Chicken Ranch Records honcho Mike Dickinson says, “I emailed the band about doing a kids record and they replied with a very enthusiastic yes! I played it for my young children and they flipped out. They love this band.” Notoriously known for its crazed live performances, Peelander-Z will embark on a tour this week that will take the band around the country through November. The first single from P-TV-Z is the band’s take on the children’s standard “Old MacDonald Had A Farm”. The track, now a ska-flavored cut called “E-I-E-I-O” is trademark Peelander-Z insanity and the video is what that insanity looks like.

P-TV-Z was recorded in with producer Evil Elvis and engineers Bryan Nelson and Chico Jones at Ohms Studio. Peelander-Z brought out the cream of ’s indie and punk crop to guest on the album. Members of The Riverboat Gamblers, The Octopus Project, Foot Patrol, Atash, and Black Joe Lewis’ Honeybears horn section all make appearances. Peelander-Pink even takes a vocal turn on French pop influenced “Dial Ring Ring Phone Pho Phone”. P-TV-Z closes with the wistful “Wasabi Man”, which is Peelander Z’s answer to Motley Crue’s “Home Sweet Home”. P-TV-Z comes packaged with a DVD featuring videos for “E-I-E-I-O”, a performance clip of “Go! Rio!”, and videos for “So Many Mike” and “Ninja High School” off of the band’s previous album P-Pop High School, plus tons of extras!

Peelander-Z has appeared at major music festivals including Bonnaroo, CMJ and SXSW, in the pages of SPIN, The Fader, Alternative Press, Time Out New York and The Boston Herald, and played with artists such as Buckethead, The Vibrators, and Guitar Wolf. The band has also been featured on TV programs like VH1’s “Best Week Ever” and Comedy Central’s “Upright Citizens Brigade” among others. At their live show, Peelander-Z guarantees intense audience participation and a chance to exercise. You’ll see the band in colorful costumes reminiscent of Japanese animation, though they describe their outfits as their skin. You’ll also see The Red Squid, human bowling and all around insanity. A rare occasion for the entire family to rock out and have a great time.

Posted by Fanatic Promotion at 12:11 PM No comments: