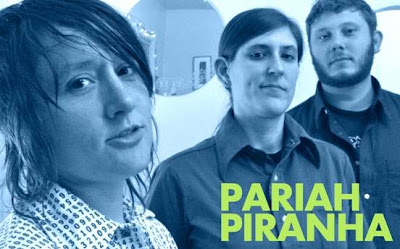 “...a sound you can’t put your finger on and can’t stop listening to.” - Curve Magazine

York, Pennsylvania-based band, Pariah Piranha is a product of the 90’s and will remain forever nostalgic. “When we were in high school, people called some music ‘alternative.’ It was a genre. It actually meant something. I think Pariah Piranha sounds like that,” says vocalist Tara Gordon. The chemistry between the three members of Pariah Piranha is obvious, and the dancing and hand claps will happen, whether you like it or not.

As an additional show of solidarity among the Queer Control and Pariah Piranha families, the band has dedicated the cover art of People People to dedication itself, with the names of the band’s supporters covering the front and back of the album. Gordon explains, “Basically we are so grateful to our family and friends and everyone involved who made this/us possible that we decided to put our ‘thank you’s’ on the cover.”

“There was an old upright piano in the backyard of the farmhouse I lived in. When I would drive away at night, a piano with deer around it would appear out of nowhere. The spooky image of animals in suits using abandoned instruments to make music stuck with me.” - Carlos Gonzalez-Fernandez, Bellflur.

“…at times reminiscent of Sigur Ros and Pink Floyd, the group manages to impart a unique intimacy and vulnerability.” - The Big Takeover

Scores of DC-based bands touted as “the next big thing” have rapidly sprung up and dissipated just as quickly, but since its inception in 2001, Bellflur has been one of the few constants on the DC scene. Bellflur challenges genre-specificity, but it does thrive in the lush space and musical grandeur that might make one call its music “dreamy” tho the odd time signatures, bare-boned harmonies and reticence speak to the dark side.

See Bellflur live at CMJ on Thursday, October 22nd at Local 269 at 7PM!

Fans of Sparklehorse, Pink Floyd, Sigus Ros and Tortoise should dig the band's latest EP (a predecessor to its upcoming sophomore full-length in 2010), Bellflur draws upon countless musical influences to convey that mood of loneliness and social bewilderment that occurs in us all. As regional website, DCist, described Bellflur, the “band has a knack for making things cold and detached sound pretty…” 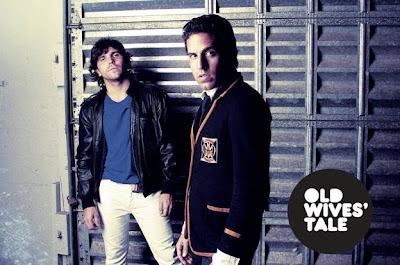 It’ll take just one listen to the debut recording from Miami duo Old Wives’ Tale to understand why brothers Jaime and Felipe Valencia have coined it “amphetamine music.” Songs from the band’s Younger Limbs release such as “Royal Fresh,” and the stand out single “[15]Amphetamine” all live up to the assertions made above by the Miami New Times. The impressive "[15] Amphetamine" Video was recently selected by celebrated French auteur Michel Gondry (Eternal Sunshine of The Spotless Mind) as the “Audience Choice Award” winner in the Babelgum.com Video Music Awards. Now the duo will venture to Paris where it will perform two nights at the [TIME*] festival to take place at venues throughout the city.

Recorded between Chicago, Seattle and Salt Lake City, acoustics and synths make a happy marriage in (on) North Carolina.

[MP3] “Love’s Not Worth It”: http://tinyurl.com/leeandwillbee-lovesnotworthit

“There is real sorrow here. Beautiful, catchy and sad. Lee’s glassy voice is sincere beyond most, and the songwriting is near perfect. I’ve spent days of my life listening to this on repeat.” - Chris Eichenseer (Some Odd Pilot)

Lee & Willbee began as a collaboration between Lee Chameleon and Markus Willbee. In the beginning they formed a strong bond as the rhythm section for La Makita Soma, criss-crossing the country playing rock clubs, raves and music festivals showcasing their energetic blend of psychedelic rock and electronic dance music. La Makita Soma made multiple appearances at SXSW and after both of their releases charted in the CMJ Top 100, the band also played the annual CMJ festival. After La Makita Soma, the musical bond and friendship formed by years of forging rhythms together continued.

Both were eager to venture outside their previous musical roles and decided to start a new project, hiding away with their instruments and recording songs that had thematic and melodic integrity and sounded sweet like candy. A tonic for troubled souls who are not afraid of a catchy melody. The two spent many hours their Chicago studio crafting the songs until one fateful day Markus was called away to the mountains of Utah.

Lee & Willbee continued their endeavor via the web and during these long months of isolation an able bodied soul came to the aid and assistance of the hermits. Seattle’s Patrick Roche joined the boys and delivered a breath of fresh air to the project. Manning his guitar and savvy attention to detail he coaxed the two young men from their solitary existences and encouraged them to reassert themselves and peddle their musical elixir. It didn’t take long till the three were thick as thieves. North Carolina is the threesome’s debut album on its own Lost In The Woods label.

See the Austin-based band that The Onion calls “this year’s hottest ticket” at Fun Fun Fun Fest next month. 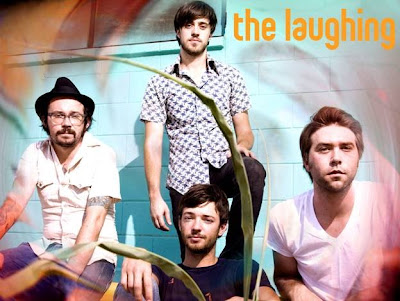 Recorded over the course of a near year, FEVER is the debut album by Austin band, The Laughing. With an aural aesthetic pulling from somewhere between early Roxy Music and the stretches of contemporaries such as Animal Collective, The Laughing has quickly attracted the attention of audiences looking for a little dance in their rock as well as a little art in their pop.

“An enticing smorgasbord of sounds with a distinct exotic feel.” – Austinist

Borrowing from some of the production tactics of classic dub recordings, with a small dose of noise rock, The Laughing has constructed an album of songs that bears only slight resemblance to its broad spectrum of influences, in turn creating something special and unique. Of the album title, band leader Logan Middleton explains, 'Fever' was the title of a book I discovered as a child that had extensive accounts of my now deceased grandfather’s work as a missionary doctor in West Africa and his discovery and treatment of highly fatal disease known as Lassa Fever.”

FEVER was co-produced by Middleton with Erik Wofford (Black Angels, Explosions In The Sky, Okkervil River). The Laughing has previously performed with MGMT, Yeasayer, The Ting Tings, Monotonix, and Tokyo Police Club among others. 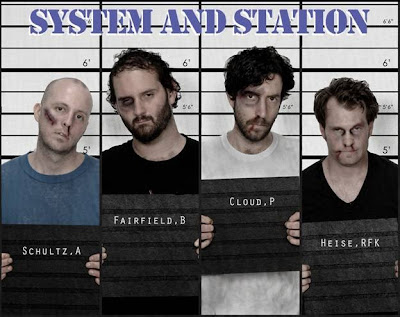 System and Station On Tour:

“What’s not possible... is you being able to resist the hook-laden guitar rock that System and Station lays down.” - Portland Mercury

2009 marks System and Station's tenth year as a touring band. It’s latest release, to be followed by a fifth full-length in early 2010, shows off a broader musical palette for the band, yet maintains its core sound of angular, melodic, and soaring rock and roll. Following a recent performance with Sunny Day Real Estate at Musicfest Northwest, System and Station launches a three-week tour today in support of I’m Here To Kill.

“Now here is a record that’s so refreshingly professional it’ll make you realize how truly amateurish most indie releases are.” - Detroit Metro Times

This short-playing EP is lyrically based on the true story of a woman living in the Pacific Northwest, her struggle with abusive relationships and the loss of her child at the hands of her then husband. System and Station leader, RFK Heise, explains, “The title I’m Here To Kill comes from the stories she told me of revenge. Waking up next to her husband, watching him sleep and thinking ‘I love you but I’m going to kill you.’”

Third album from Canadian singer-songwriter Barzin is the best break up record since Sea Change.

Notes To An Absent Lover already acclaimed by Mojo, Uncut, and Q. Album to see US release this month. 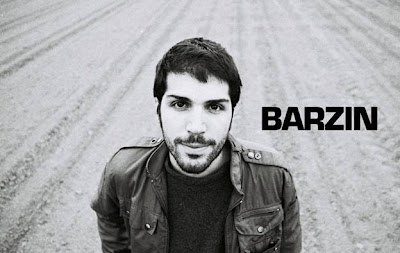 [MP3] “Nobody Told Me”: http://tinyurl.com/barzin-nobodytoldme

[VIDEO] “Nobody Told Me”: http://tinyurl.com/barzin-nobodytoldme-video


Reflecting the highs and lows experienced by the human heart in the aftermath of a break-up, Barzin’s third album, Notes To An Absent Lover, balances the introspection of his earlier work with up-tempo orchestral arrangements that provide a richly melodic heartbeat to these glowing confessionals.

“Four Stars. Rarely does sorrow get to sound quite so entrancing or cathartic.” – Q

Personal but never indulgent, the raw honesty of the lyrics details universal themes of sorrow, regret and anger, evoking all the vulnerability and shifting emotions of a failed relationship. From the gentle, grieving steel guitar of “Soft Summer Girls” to the defiant drumbeats of “Look What Love Has Turned Us Into,” Notes To An Absent Lover brings new textures and colours to Barzin’s palette.

“…an intimate, chillingly beautiful reflection on a lost love and its aftermath.” - Mojo

In addition to Karen Graves’ string arrangements, splashes of vibraphone, pedal steel and banjo surface amid the traditional guitars, bass and drums. In harmony with the sentiment guiding them, the musicians display a graceful empathy while Barzin’s voice and words take centre stage. Just as the lyrics eschew symbolism in favour of candour, gone too is the sonic experimentation employed in 2006’s My Life In Rooms, replaced with a more direct style of music and a greater ‘pop’ sensibility.

“Nobody Told Me”: mp3 video