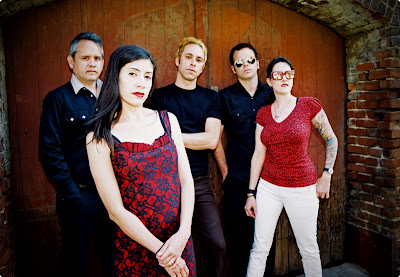 Tiger! Tiger! (L-R): Sam Leyja, Buffi Aguero, Mario Colangelo,
Shane Pringle, Suzanne Gibboney. Photo credit: Karla Jean Davis.
+++
PLAY, POST & SHARE
“Perfume of Despair” is the first single from the new Tiger! Tiger! album “Cut Them Where They Bleed” due March 13th!
[SOUNDCLOUD]: http://soundcloud.com/fanaticpro/tiger-tiger-perfume-of-despair
+++
Cut Them Where They Bleed, the latest “love/hate letter” from Atlanta, Georgia band Tiger! Tiger! is set for release via Austin’s Chicken Ranch Records on March 13th, 2012. The album, featuring cover art by renowned illustrator John Baizley, is preceded by the single “Perfume of Despair” which is streaming now.
On the track, Tiger! Tiger! front woman Buffi Aguero delivers a bitter, battering wind, alternately cooing and caterwauling in a haunting harangue. Aguero uncorks a bottle of emotional spirits, dumps the contents, and uses the empty vessel to make a Molotov cocktail of words.
In addition to the scathing vocals of Aguero, the reckless fivesome further describes its sound as being comprised of “guitars strung with razor wire (courtesy of Mr. Shane Pringle), tubercular organ (by Mr. San Leyja), stomach punch bass guitar (Ms. Susanne Gibboney), and drums that Mr. Mario Colangelo thumps and snaps like the neck of a hanged man, wrongly convicted, but guilty of... something.”
Tiger! Tiger! has performed with notable luminaries Jon Spencer Blues Explosion, The Woggles, and The Subsonics, superstar centurions The Fleshtones, and international big-shots Mastodon and Black Lips. Cut Them Where They Bleed is the follow-up to 2007’s The Kind of Goodnight and is set for release on March 13th, 2012.
Members of Tiger! Tiger! are available for interviews.  Contact Josh Bloom at Fanatic for more information.
+++
Tiger! Tiger!
Cut Them Where They Bleed
(Chicken Ranch, March 13th, 2012) 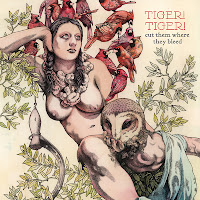 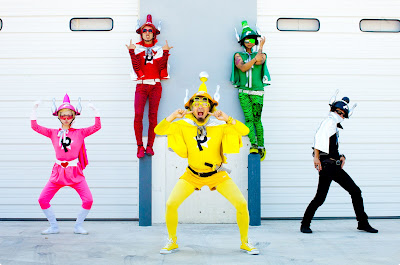 Peelander-Z (L-R): Peelander-Pink, Peelander-Red, Peelander-Yellow,
Peelander-Green, Peelander-Black. Photo by: Whitney Lee.
+++
PLAY, POST & SHARE
“Star Bowling” is the first single from the upcoming Peelander-Z album “Space Vacation” due April 10th!
[SOUNDCLOUD]: http://soundcloud.com/fanaticpro/peelander-z-star-bowling
+++
“Peelander–Z put sanity in a headlock...” – Alternative Press
“Standing on the sidelines is not an option when Peelander–Z hits the stage.” – Time Out New York
“There is no escape from the grind like the Peelander escape from the grind.” – The Fader
Hailing from the Z area of Planet Peelander (but now based in New York City by way of Japan), action comic punk band Peelander–Z reveals “Star Bowling” today, the first single from its upcoming new studio album. Space Vacation, the band’s seventh full-length, is set for release April 10th, 2012 on the Austin-based label Chicken Ranch Records.
Comprised of color–coded band members Peelander–Yellow, Peelander–Red, Peelander–Green (and at various times Peelander–Pink and Peelander–Black), Peelander–Z made its greatest impact to date in 2011 with the greatest hits album Super DX Hitz, sell–out shows around the US and Canada and a stint as the band all of the other bands had to see on last Summer’s Vans Warped Tour.
All of these good times can be heard on Space Vacation, which, for a band that already is known for having a good times (those who have seen the band live will never forget “human bowling”), sets the bar pretty high.  Peelander–Pink even steps to the mike with her take on the Cyndi Lauper classic “Girls Just Wanna Have Fun.”
A video for “Star Bowling” shot by filmmaking siblings The Zellner Brothers will make its world premiere at a special event at the Beauty Ballroom at this year’s SXSW festival on March 11th to be followed by several performances by Peelander–Z throughout the week. See below for the band’s upcoming tour dates and SXSW appearances.
Peelander–Z’s seventh album Space Vacation will be released via Chicken Ranch Records on April 10th, 2012.  The album will be available on CD, vinyl and digital and as a special collector’s version including a DVD and limited edition Peelander–Z comic book featuring artwork by John Holmstrom (famous for illustrating the covers of The Ramones albums Rocket to Russia and Road To Ruin).
Peelander-Yellow of Peelander-Z is available for interviews.  Contact Josh Bloom at Fanatic for more information.
+++
Peelander-Z On Tour
03/02 Ithaca, NY @ The Haunt
03/03 Pittsburgh, PA @ 31st Street Pub
03/05 Toledo, OH @ Frankie’s
03/06 Indianapolis, IN @ Radio Radio
03/07 St. Louis, MO @ Firebird
03/08 Hot Springs, AR @ Maxine’s
03/09 Shreveport, LA @ Media Star Entertainment Hall
03/10 San Antonio, TX @ The Korvoa The Big Spill Festival 1230AM
+++
Peelander-Z
Space Vacation
(Chicken Ranch, April 10th, 2012) 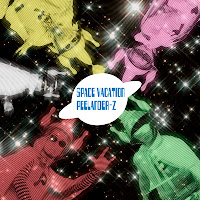 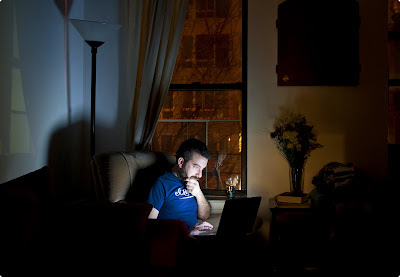 Mike Pomranz of World Blanket. Photo by Gabriela Herman.
+++
PLAY, POST & SHARE
“And Here We Are (Again Maybe)” is the first single from the upcoming album “2012” by World Blanket.
[SOUNDCLOUD]: http://soundcloud.com/fanaticpro/world-blanket-and-here-we-are-again-maybe
[MP3]: http://www.fanaticpromotion.com/projects/worldblanket/mp3/world-blanket-and-here-we-are-again-maybe.mp3
Learn how to play the One-Finger Single “And Here We Are (Again Maybe)”!
[YOUTUBE]: http://www.youtube.com/watch?v=5Dt2LXZKjGE
+++
“…part Bob Dylan, part New York trashy rock n’ roll…” – WXPN, Philadelphia
By day, Brooklyn’s Mike Pomranz is a comedy writer who blogs for the “Tosh.0” program on Comedy Central, so it’s not surprising that he would find the humor in his work as a songwriter as well.  “I want this band to bridge the gap between Nirvana and Electric Light Orchestra,” Pomranz has said. The upcoming album 2012 under Pomranz’s group name World Blanket showcases this combination of musical basics and over the top production that caused SPIN to note that “World Blanket boomed like a big-riff rock beast, despite acoustic guitar and violin dressing.”
Part of the humor is in just how basic the genesis of World Blanket’s anthemic-leaning songs can be.  Case in point is the album’s first single “And Here We Are (Again Maybe)” about which Pomranz coined a phrase, calling the song a “One-Finger Single.”  Here Pomranz demonstrates (in an early morning, just-out-of-bed instructional video) how to perform the song yourself, with just a single digit.
Bringing additional fingers to the fold on the fully realized version of “And Here We Are (Again Maybe)” (as well as the rest of 2012) is violinist Katherine Fong, a Julliard trained member of the Metropolitan Orchestra (she has also worked with everyone from John Mayer to Tony Bennett), bassist Dean Moore (formerly of Jive Records band Dirty Blonde) and drummer Jonathan Flax (also with Freedy Johnston).
2012 was recorded by Pete Min, the man behind the boards for the hit debut album by The Airborne Toxic Event. Also featured is the Calder Quartet which has previously contributed strings to The National, Vampire Weekend, Andrew WK, and many others. 2012 by World Blanket will be released on the band’s own No Applause Records label on April 3rd, 2012.  Mike Pomranz of World Blanket is available for interviews.  Contact Josh Bloom at Fanatic for more information.
+++
World Blanket
2012
(No Applause – April 3rd, 2012) 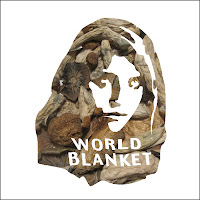 “German” trio aims to fulfill the pathetic desires of those who need entertainment.
+++ 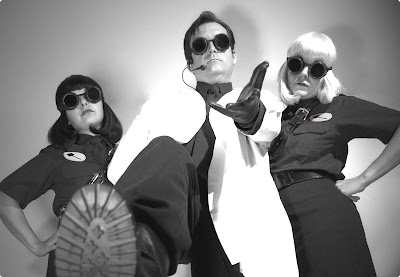 Automusik (L-R): Female Rock Unit #1, Automusik, Female Rock Unit #2. Photo Credit: Carol He.
+++
PLAY, POST & SHARE
“General Masses” is the title track from the new EP by Automusik.
[SOUNDCLOUD]: http://soundcloud.com/fanaticpro/automusik-general-masses
+++
“There isn't a single sensibility, American tradition, or mega-popular pop act Automusik is afraid to insult...” - The Onion
[AUTOMUSIK] is a moderately priced musikal entity, comprised exclusively of ONE superiorly crafted male-sexual, anterior lead unit commonly referred to as [AUTOMUSIK], TWO productive egg-bearing [FEMALE ROCK UNITS], commonly referred to as [FEMALE ROCK UNIT #1] AND [FEMALE ROCK UNIT #2] and ONE singular [VISUAL VIEWING UNIT], commonly referred to as [VISUAL VIEWING UNIT].
[AUTOMUSIK] is a vastly superior musikal celebrity than those who currently aspire to become the object of attention for extravagantly addle broadcast spectators and silly anthropoidal beings who collectively mass before digital components in order to fulfill their pathetic desire to become entertained by those who possess an inferior brand of such.
This current version of [AUTOMUSIK] is currently residing within the territorial limits of [AUSTIN.TEXAS.UNITED STATES OF NORTHERN AMERICA], unfortunately sharing physical space with many who desire to become [FAMOUS PERSONALITIES] such as [AUTOMUSIK] based solely upon the wearing of irony laden clothing articles, breeding with those more famous than themselves, producing musikal tones of an inferior and commonplace arrangement and systematically destroying their reproductive organs by means of bicycle transportation.
[AUTOMUSIK] is currently producing and dispersing physical and digital product through the unfortunately named [CHICKEN RANCH RECORDS] musikal corporation.
You may make contact with [AUTOMUSIK] via Josh Bloom at Fanatic.
+++
Automusik
“General Masses” EP
(Chicken Ranch Records – Out Now) 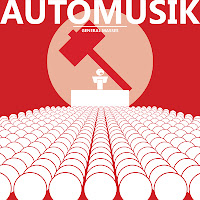