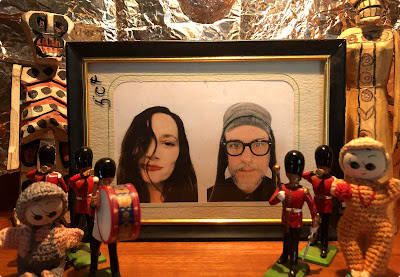 FLOOD Magazine premieres the video for “Black Tar of Camden Yards” featuring contributions from YouTube celebrity Jacob The Carpetbagger. Watch it here or at the link below.

“This band has been worth waiting for. A sound that is as fresh today as it would have been a decade ago,” says PopMatters in its premiere coverage of “Jack is the Pulpit” from the decade-delayed debut album from Figg. Listen here or at the link below.

Brooklyn Vegan says “Black Tar of Camden Yards” by Figg is “a very lovely dose of chamber pop-informed indie rock” in its premiere coverage of the song. Figg’s debut self-titled album, delayed for a decade, will finally see national release on June 12th.

Figg, the Seattle and Los Angeles-based duo of Robin Peringer and Gilden Tunador, was originally scheduled to release its debut album a decade ago.

Peringer’s musical past is like a giant quilt of the Northwest music scene, having played guitar in Modest Mouse, 764-HERO, Love as Laughter and many more luminaries of the region. When he teamed up with Tunador, the duo found local admiration and ultimately national attention as part of the (intentionally misspelled) band Carissa’s Wierd.

Figg’s sound was perfect for the moment, but, shoved, then shelved, the album’s champions went away. Jump to a decade later, and now, a new moment has emerged for Peringer and Tunador as Figg’s self-titled debut, sounding fresh as ever, has now seen an appropriate release today, June 12th, 2020.

“Releasing our record has been an ego-smashing lesson in the appreciation of patience, the unfolding of the creative process, and the magic of universal timing,” Tunador says. After the band’s deal fell apart, they shopped the album around, but were still a bit too shell-shocked from the whole experience.

Five years later, in 2015, just as Bandcamp was becoming the leader in artist-focused and controlled streaming, Figg decided to finally make the record available. They posted it without promotion or any fanfare at all. They just wanted their friends to be able to hear it.

Friends tuned in, and the band felt satisfied that at least the album was available to the public. Some of that public included legendary and internationally influential public radio station KEXP. The album’s lead track “A Case Study in Plagiarism” was added to rotation and anointed as a station “Song of The Day.”

KEXP said at the time, “Tunador’s voice has a striking clarity in the track mix of lead-off cut ‘A Case Study in Plagiarism,’ paired with a slightly fuzzed out guitar part, which builds to a beautiful, layered refrain. Think of Nancy Sinatra’s spaced-out work with Lee Hazlewood, if she was raised on Slowdive.”

Figg was revived, at least in this small, but important way, and this development moved Peringer and Tunador to start stockpiling new songs, and to give their generally unheard debut album its due.

“It’s as if the music has a life of its own and is determined to keep on breathing,” Tunador explains. “We are at the point in our lives where we understand the importance of doing what we love and we’re excited that the timing is aligned for this album to join the world with full promotion and availability across all platforms.”

The debut album by Figg, originally scheduled for release in 2010, is out today. Members of Figg are available for interviews. Contact Josh Bloom at Fanatic for more information.

Posted by Fanatic Promotion at 12:59 PM No comments: 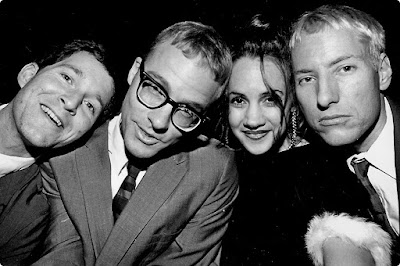 The Orange Peels chatted with LA Weekly about the Square reissue (aka Square³ aka Square Cubed aka Square x 3) as well as the band’s upcoming double-album of all-new material, scheduled for release in the fall of 2020. Click through to read more and to hear “Thank You,” the band’s first new single in over two years.

“For many artists, music is never complete,” says American Songwriter in its piece on the “evolution of a song,” in this case, the 4-track demo, scrapped California version, and re-mastered album mix of “Everybody’s Gone,” taken from 1997 debut album Square by The Orange Peels. “The band is paying tribute to one of its go-to and most endearing songs, “Everyone’s Gone” by releasing the various versions of the song that have existed since its inception, thus documenting how it’s grown alongside the band.” 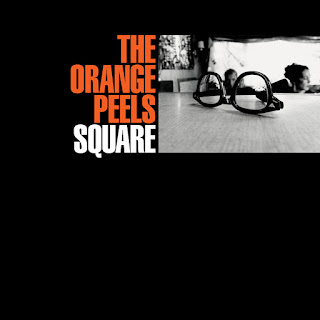 Allen Clapp explains: It’s 1995. The musical landscape is littered with bands drowning in self-loathing, feigned rage, and a decidedly non-literal definition of irony. The timing couldn’t be worse to embark on recording sessions for a collection of earnest, melodic pop songs.

But it’s exactly what happened. Little did I know that the project would have me and my bandmates jumping between three different record labels and two producers, or that it would wind up being released under a band name I couldn’t have imagined.

Everything that happened in the next two years would redefine my concept of making music and what it meant to be in a band. It’s how and why we became The Orange Peels.

So why are we here in the early light of 2019, revisiting this album that came out in 1997? Three reasons.

First, the album never came out on vinyl, and we’ve always talked about the idea of eventually releasing it as a 12” LP. We sequenced the original release in two halves, and have always thought of it as having a Side A and a Side B (with “Spaghetti-O Western” as the end of the first side, and “She is Like a Rose” kicking off the second).

Third, we want to re-master the original tapes and collect all this stuff to make the ultimate edition of our debut album. Ultimately, it would be great to put all of this on vinyl and release it as a triple album—and if there’s enough interest, that could still happen—but realistically, we’re hoping to release a re-mastered version of the original album on heavy, 180-gram vinyl with a double CD holding all the bonus materials.

The deluxe reissue of Square by The Orange Peels aka Square³ aka Square Cubed aka Square x 3 is out June 26th via Minty Fresh.

Members of The Orange Peels are available for interviews. Contact Josh Bloom at Fanatic for more information.

Posted by Fanatic Promotion at 2:20 PM No comments:

“I wanted to write from the perspective of my younger self, but also with the idea that I could never actually have that perspective again,” George says. 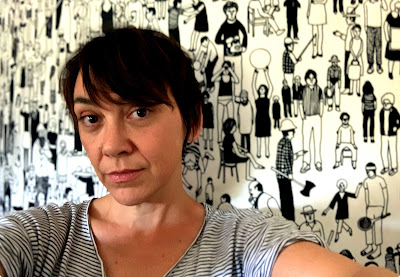 FLOOD Magazine’s premiere coverage of the three-song bundle “The Youth of Angst” by Inara George states, “With ‘Brother’ already out in the world, she’s previewing that track’s two complementary numbers: the preceding ‘1973’ and succeeding ‘Sex in Cars.’ They match the sweet poppiness of their predecessor, and nicely complementing the work George has accomplished thus far as a solo artist and among the many other projects she’s been involved with.”

“Brother” also had the distinction of being named “Today’s Top Tune” by internationally recognized Los Angeles-area community radio station KCRW, which says, “The Bird and The Bee’s Inara George and producer Wendy Wang have sporadically snuck away during the last few years to work on a handful of songs. ‘Brother’ speaks to their familial bond and is the first song we hear from their collaboration.”

Inara George
“The Youth of Angst”
Out Now
(Release Me Records)

Inara George has been getting together with producer Wendy Wang for a couple of hours, here and there, off and on over the past few years, working on a handful of songs that has now been released as the three-song bundle “The Youth of Angst” via Release Me Records.

“Wendy started playing with The Bird and The Bee when we released our second album,” George says. “I remember being impressed with her right away. That was about 12 years ago, and since then she’s become an in-demand producer and songwriter, as well as a dear friend and collaborator. I’m equally proud of her and in awe of her.”

George continues, “There was no rush on my side, and Wendy’s been super busy with her own career, so it took a few years to finish by getting together for a few hours every so often. Maybe I had it in mind to make a full album? Or maybe a traditional EP?”

As it turns out, George got the word “bundle” stuck in her head after a conversation with a friend.

No matter, it stuck, and in fact “The Youth of Angst” feels like a bundle. Fresh, even considering its long development, and innocent, even with a song called “Sex In Cars”.

“I wrote ‘Sex In Cars’ after the artist Terry Allen asked if I’d be a part of an art installation he was creating for The Contemporary Austin. When he asked me to write the song, I immediately thought of a photograph by RJ Shaughnessy that I had bought as a gift for my husband.” The cover of “The Youth of Angst” features that Shaughnessy shot and the song itself is as bare as the subject matter.

“Wendy and I recorded several different versions of this song,” George explains. “But there was something about more production that seemed to make it slip away from its initial intention.” The version that made it to the final recording is actually the original voice memo that George sent to Allen. “I still haven’t had a chance to see that installation, I hope I can someday... soon,” George says.

Innocence isn’t just for “Sex In Cars” here. Youth… memories of... loss of… is at the core of this group of songs that, although just a bundle, plays with a moving, dramatic arc.

“‘1973’ is a song I wrote for a friend,” George explains. “She lost a child almost ten years ago and to mark his birthday every year, I write a song. The songs end up being about him, but also but her and ‘1973’ is really a love song about our friendship. As for “Brother,” it’s pretty simple: “I wrote this song for my brother, haha. No one will ever know you better than your brother can.”

“The Youth of Angst” is the first in a planned series of collaborative releases “with a little theme and not the huge pressure of a full album,” George says about how she plans to make this long experiment into something more frequent. For this release “I wanted to write from the perspective of my younger self, but also with the idea that I could never actually have that perspective again. I suppose this bundle is nostalgic for a time and feeling that isn’t really possible to recreate, or only possible to recreate in my imagination.”

Understanding what once was and what will be is especially important now, in the new reality of 2020.

“I think we are all kind of grappling with this reality right now. We can only move forward from here. Life won’t be the same for a while, or maybe ever. But it’s nice to dream about the past while reimagining the future, and I like the idea of doing these little collaborations, especially in these times of isolation.”

Inara George’s three-song bundle “The Youth of Angst” is out now via Release Me Records. Contact Josh Bloom at Fanatic for more information.

Posted by Fanatic Promotion at 11:15 AM No comments: