pH10 offers a nasty, noisy sound (and a marriage proposal) reminiscent of The Beastie Boys growing up on Slayer rather than Afrika Bambaataa. 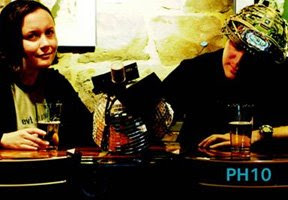 “To understand pH10, start by imagining The Beastie Boys growing up on Slayer rather than Afrika Bambaataa. Then, you’ll need to figure out how records created with no electric guitars in site manage to be this damn heavy. Finally, a lesson or two in overdriven analog circuits at the community college is in order. - Alternatively you could just pop in one of their disks, start shaking your ass and it’ll all come to you naturally” – Time Out London

Brooklyn-based pH10 has been making records and playing shows for ten years. Concerts are hyped up parties with intense visual projections, a massive wall of sound and strange occurrences including strobe light helmets and dancers wrapped in vacuum hoses. Having played all over the US, Canada and Europe, pH10 has developed strong performance skills to back up their studio recordings. This is a finely tuned stage show that leaves audience members danced-out and smiling. Although the pH10 crew insists on light-hearted antics in their performances, they take their productions seriously. This is apparent by the 2005 first place finish in the Dance/Electronica Category of the International Songwriting Competition and being awarded the ‘Indie Award’ by the Independent Artist Registry 2006.

And just because they take their productions seriously, doesn’t mean pH10 is comprised of heads-down studio geeks, either. Band leader Recone Helmut states, “We are tough. We’ve played the nastiest venues and rocked the sketchiest sound systems. We’ve played in areas of the world where the electricity shows off to its friends by killing expensive samplers. We have taken airplanes to play warehouse parties that were shut down before our gear cleared airport security. We’ve recorded entire records in unfamiliar studios with no engineer and the ‘tight deadline.’ Be assured, pH10 can take it. However, there is one thing that strikes fear in our jaded hearts - wait for it - day jobs.”

So, in trying to keep Recone and crew out of ‘business casual’ for 2008, we bring you the nastiest, noisiest, scariest, loudest and by far the heaviest pH10 release to date. Well Connected will hurt feelings. Highlights include appearances by Brian Bell-Fortune, Pete Miser, Jamalski, KCutz and I-45 plus a new level of crushing production thanks to the sinister Virus Ti and a deal with the Devil they call Sherman Filter Bank.

And just because pH10 is tough doesn’t mean Recone doesn’t have a romantic side. He explains, “SyBO T, my partner in pH10 is also my girlfriend of seven years. I proposed a couple of months ago via the artwork of this new disk. If you look through the case on the back side of the spine, you will see ‘Marry Me SyBO T?’. Well, she said yes and we’re getting hitched next year.”

Quotes From The Press:
“pH10 churns out some of the chunkiest, most amusing New York drum ‘n’ bass since Ming + FS debuted their Junkyard style many moons ago” – Thomas Manalo, Lotus Magazine, USA

“Fearless, free and freaky.... They had their set and sound down to an exact science, making each and every beat count.” – Paul Gangadeen, Chartattack, Canada

“How do you describe pH10 in two words? Fuckin’ ill! ...the best thing to happen to jungle music since Jane!” – Get Underground Magazine, USA

“Without any exaggeration, this album may well be among the most brilliant examples of ‘100% chemistry’ between MC and producer.” – 4elemente Magazine, Romania

“Producer Recone Helmut takes us with his mad band of genius DJs on an electronic odyssey that displays diversity, wit and an exciting sound that is all their own.” – Fly Magazine, England

“Recone Helmut, the twisted mastermind behind the behemoth known as pH10, finds himself once again surrounded by talented, jittery souls who wanna show you how it’s done… One standout track, ‘4PM’ crashes down like a spacepod on an alien planet, grows big knobby wheels and rides that rocky terrain like it ain’t no thang.” – Technocracy Magazine, USA

“Not a lot of buzz out there for the drum’n’bass these days, I know; but if buzz is all you’re after, then go take a good hard look in the mirror and ask yourself how things got so bad. While you do that, I’ll be out here dancing to this disc, and probably stealing your girlfriend and/or boyfriend. Because this is some funky stuff, and no matter what kind of notions of cool you subscribe to, you need some funk in your life.” – Stylus Magazine, USA

say guys, this is rich no biggie but i also go by prodigal son. the track bulldozen is by me and i45 not i45, not just i45 i would like to see this corrected no hard feelings.